Most of us have encountered bean bag furniture at some point in our lives, but these encounters almost always occur in private, residential settings. You may see small bean bags in the corner of a child’s room, oversized bean bags in a home study room or weatherproof bean bags outside on a patio or near a swimming pool. However, bean bags are now becoming prevalent in the most unlikely of places: professional offices.

In recent years, many companies, especially those in the technology industry, have embraced the idea that making staff relaxed and comfortable will translate into increased productivity. Corporations and startups around the world are hiring modern architects and interior designers to incorporate luxurious, unique or ultra-ergonomic ideas into the offices at their primary and regional headquarters, and the results have been shocking. Just a few examples of companies that have introduced comfortable work environments, many of which include bean bag furniture, are as follows:

LivingSocial has created a comfortable workspace that the executives say reflects the company’s vision and helps staff to interact and collaborate on projects. The walls are made of exposed brick and are accompanied by old doors and shutters over the windows. One of the common rooms includes a skeeball game, a giant, mirrored wall and an HD projection screen.

Zappos, the online shoe retailer recently bought by Amazon, has retained a low-walled cubicle office, but the ceiling has been transformed into a living jungle. Employees are encouraged to make their own additions to the décor with stuffed animals, toys and other decorations.

Lego has turned its offices into open playgrounds with faux-grass floors and ceilings painted to look like puffy-clouded blue skies. Staff members sit on the floor or on short bean bags at small, plastic tables. This design provides a comfortable and pleasant setting where employees can play with Lego to develop new ideas. Lego management states that the offices have boosted both employee morale and productivity.

ThinkGarden’s employees work a minimum of 50 hours per week, but they do so in an office that is designed to reflect nature with open skylights, flowers, trees and bean bags that look like boulders and large stones.

Big in Japan in Dallas, Texas

Big in Japan is a mobile app developer that uses open floor plans with plenty of relaxing and comfortable amenities, such as bean bag loungers, flat-screen TVs, video game consoles and foosball tables.

Google is often cited as the inventor of cool offices even though it is actually just the most popular company to implement them. The rooms in the Google building feature unique designs, such as QR barcode signs on the walls, soundproof rooms with electric guitars, microphones and drum kits, rooms with hammocks, indoor bamboo gardens and rooms with a variety of multi-colored bean bags and bouncy balls.

Hootsuite’s second headquarters in Vancouver opened recently. Themed in the style of a 1950’s ski cabin, there is a twenty-four-hour gymnasium and large luxurious bean bags throughout. 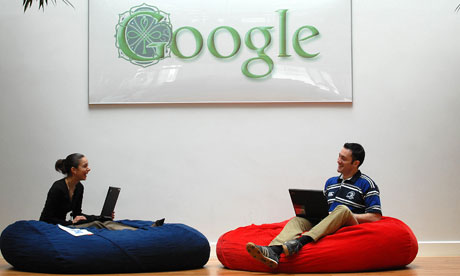 Google has been using bean bags in their offices for over a decade. Photo Courtesy of John Cogill/AP

The reason for creating comfortable offices with oversized bean bag chairs can best be expressed by reviewing the efforts of Kaiser Permanente to update the offices in its headquarters. For inspiration, Kaiser researchers studied the designs of technology firms, including Pandora, Google and Oracle. They noticed that these companies used designs that were meant to culture relaxation and collaboration.

The Kaiser researchers also noted that traditional office spaces stifled creativity by being bland and separating workers into small spaces with dull colors, unnatural lighting and walls between their peers. Break rooms were also bland and featured little more than a table, chairs and basic kitchen accessories. Kaiser Permanente reduced 33 small offices into four large offices with natural lighting, bright colors and unassigned seating, and employees became happier and more productive. These types of offices are also perfect for attracting new talent and retaining productive employees by fostering a sense of loyalty. The British Council of Offices conducted research on this matter and found that 60 per cent of workers said that their productivity increased in comfortable environments. In another study called the What Workers Want Report, 43 per cent of workers between the ages of 18 and 24 preferred non-traditional offices while only 28 per cent stated they would rather work in standard, corporate-style offices. Daniel Kreighton-Foster, the CEO of a large IT firm in Melbourne, Australia, says that after he refitted his offices with bean bags and games, productivity improved and employees became more loyal, both of which worked to increase the company’s profits. Employees worked harder, and they stayed longer, reducing the costs associated with interviewing, hiring and training new recruits.

Although it has traditionally been difficult to increase productivity in the workplace, a Gallup poll found that the key is to keep workers engaged and inspired. This can be achieved through several methods, and bean bags may play a role in many of them:

1. Encourage collaboration and teamwork in the office.

Productivity can improve exponentially by fostering collaboration and teamwork. One way to do this is to create larger offices with shared furniture. Oversized bean bags are not only comfortable but can be large enough to accommodate two, three or even four adults.

To increase productivity, give employees a reason to stay in the office rather than going out or going home. When workers are huddled into small, drab cubicles with bright, fluorescent lights and hard furniture, they feel trapped and will leave at the first chance they get. If you provide them with comfortable furniture, interesting surroundings and opportunities for entertainment, they will be more than happy to stay and get some work done.

3. Give workers a chance to be themselves.

No one wants to do something they don’t like or that does not fit their personalities. By providing an assortment of options for furniture, relaxation and stimulation, employees will feel more at home and will appreciate that they can be themselves while working.

Spread the love
This entry was posted in Bean Bag Chairs.